Experiencing the Pope's Weekend in Philadelphia 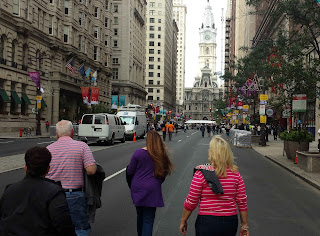 The Pope’s visit to Philadelphia was a joyous event that was long anticipated by everyone in the city. Part of what it meant for the many employees in the Food and Nutrition Department at Philadelphia Hospital was a long weekend away from home. We were requested to sleep over in the building from Thursday, September 24th, until Monday, September 28th. There were many concerns with the situation, including sleeping accommodations, showering, meals, work hours, laundry and the like. Weekly “Papal Visit” employee meetings took place regularly starting in August, and the closer we came to the event, the more at ease everyone seemed. 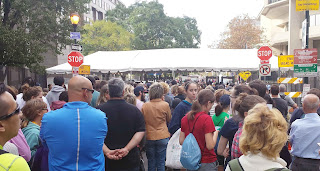 The Hospital did a great job organizing our workforce and taking care of those concerns. Clean linen, brand new air mattresses and pillows, and gift bags were among the items given out. Free meals, bingo and other games, movie nights, theater-screen-sized television with feeds for all the events, and even NFL football broadcasts, helped everyone adjust to the sacrifices made to ensure a smooth operation during the minor Center City shutdown that took place. I have to commend our “PA Hospital Papal Visit Committee” for their efforts. It was amazing to see the teamwork from all departments during the long weekend.

Between working ten hours a day, providing ‘round the clock meals for all of our “stay-over staff,” I actually had the opportunity to attend the Saturday’s Pope Ceremonial events, around the Ben Franklin Parkway area. There were so many people of different faiths in attendance, including Jews, Baptists, Muslims, and Buddhists, along with the Catholics, and that’s just naming a few, in attendance to experience this global event. I could hear people having conversations about the Pope, Catholicism, religious beliefs, gay marriage, and many other issues. Some very deep and important discussions were taking place, sometimes between complete strangers. There was a spirit of love, unity, and respect that seemed to be present in the air and once the Pope arrived, there was tremendous excitement in actually seeing him in person as he passed by the crowds lining the streets. For me, it was a highlight of my long weekend.

I finally got to go home on Monday afternoon. I was tired, and my feet were sore, but I felt good. I was very proud of my co-workers, and also proud of a few thousand random people on the Ben Franklin Parkway, that happened to share a once-in-a-lifetime experience with me.