This information arrived on October 30, 2014, concerning the needs addressed just for the month of October:

Now here is the local need in the William Penn school district served by the Interfaith Food Cupboard:
Here is a description of their efforts and their contact information:

You may also check their Facebook page for additional information: https://www.facebook.com/interfaithfoodcupboard/info
Posted by Lansdowne Baptist Church No comments: 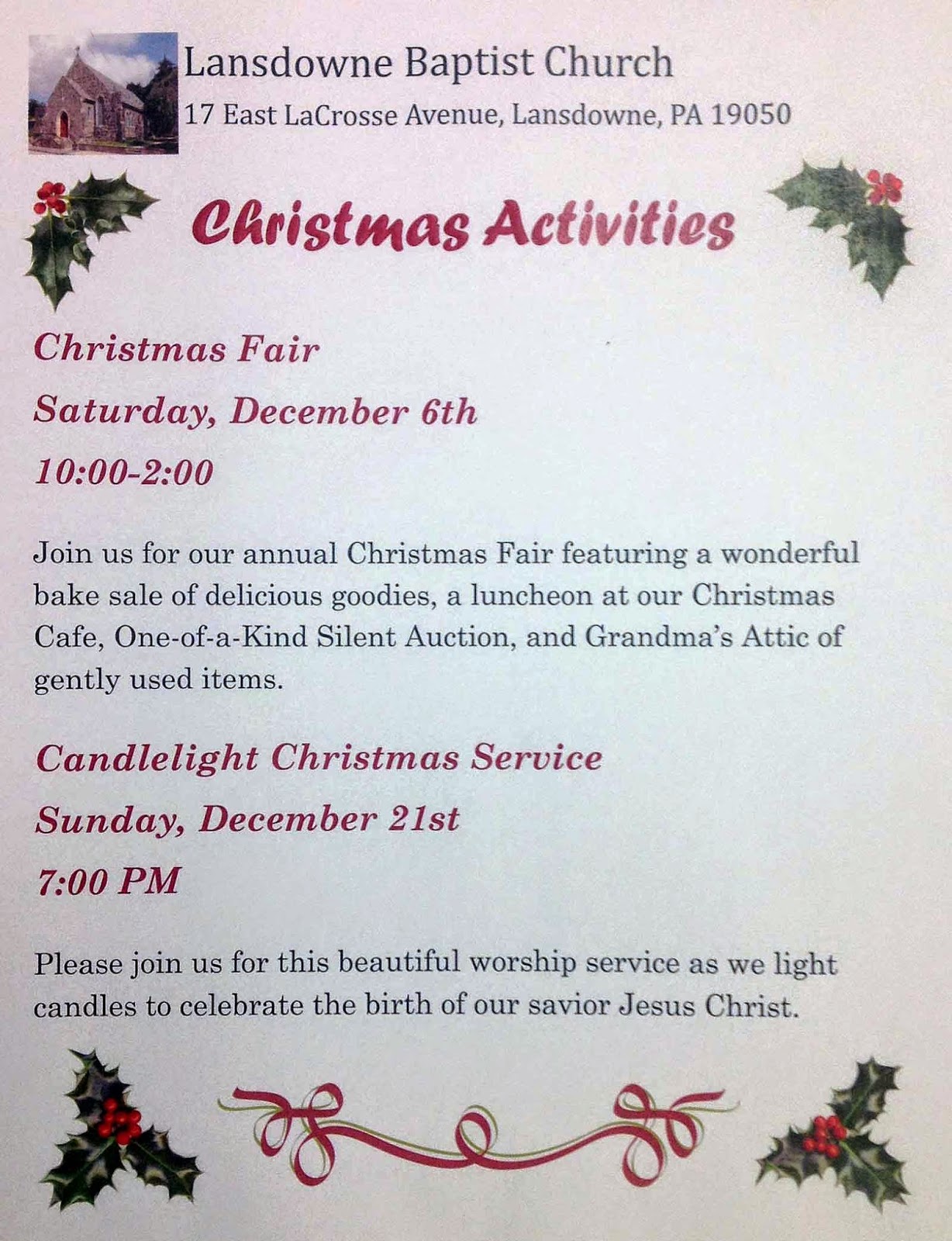 You are invited to join us for both our Christmas Fair on Saturday December 6th from 10:00 am to 2:00 pm AND our Candlelight Service at 7 pm Sunday, December 21st. Both are wonderful and well worth your time.
Posted by Lansdowne Baptist Church No comments: 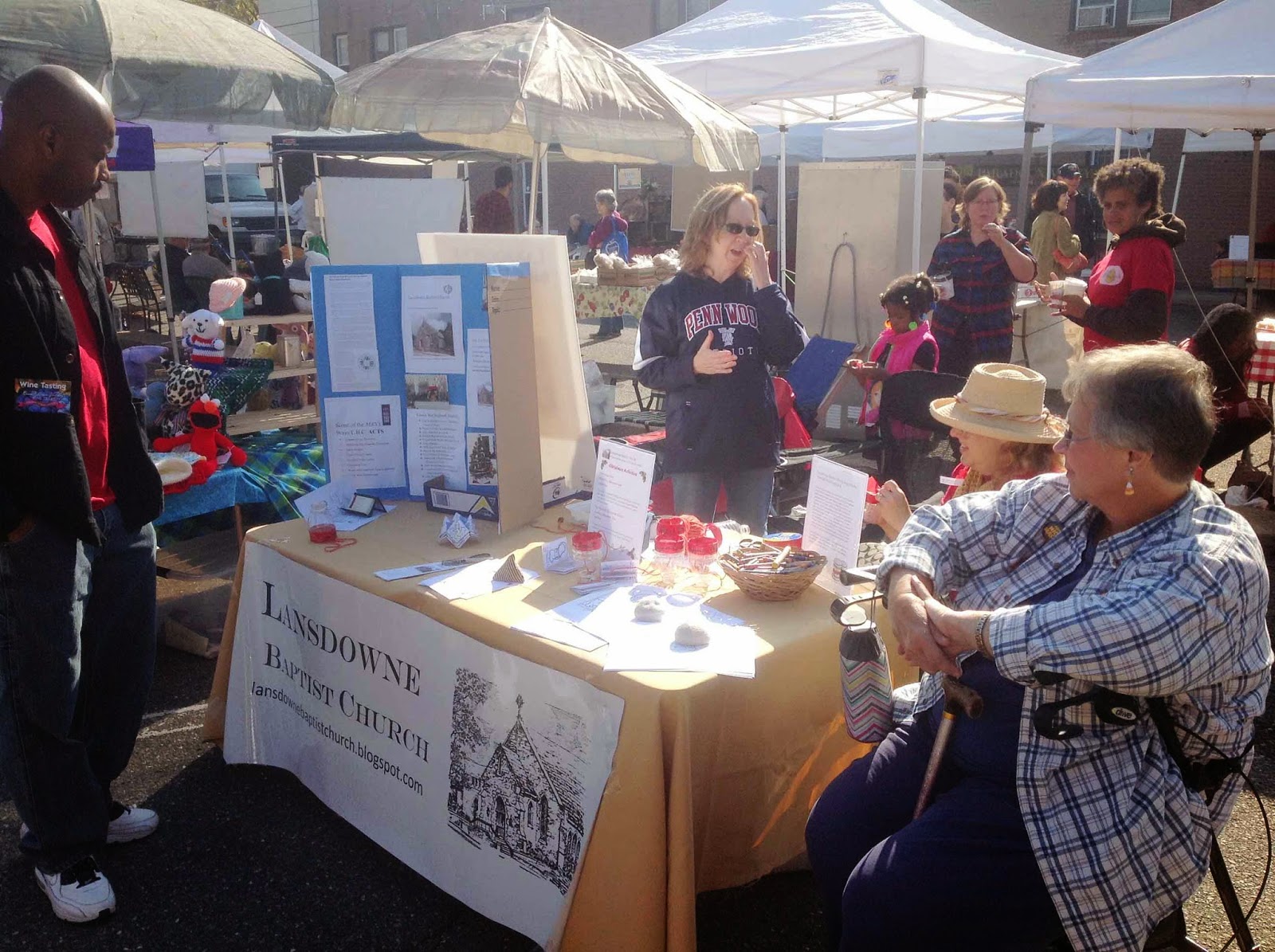 Set up and waiting for the community to arrive!

On a sunny Saturday morning, members of Lansdowne Baptist Church joined in the local Farmer's Market Community Day, October 25. It was a terrific opportunity to talk with and introduce ourselves to members of the community and invite them to our annual Christmas Fair and Candlelight Service in December. We put our best foot forward with our displays and our friendly members. 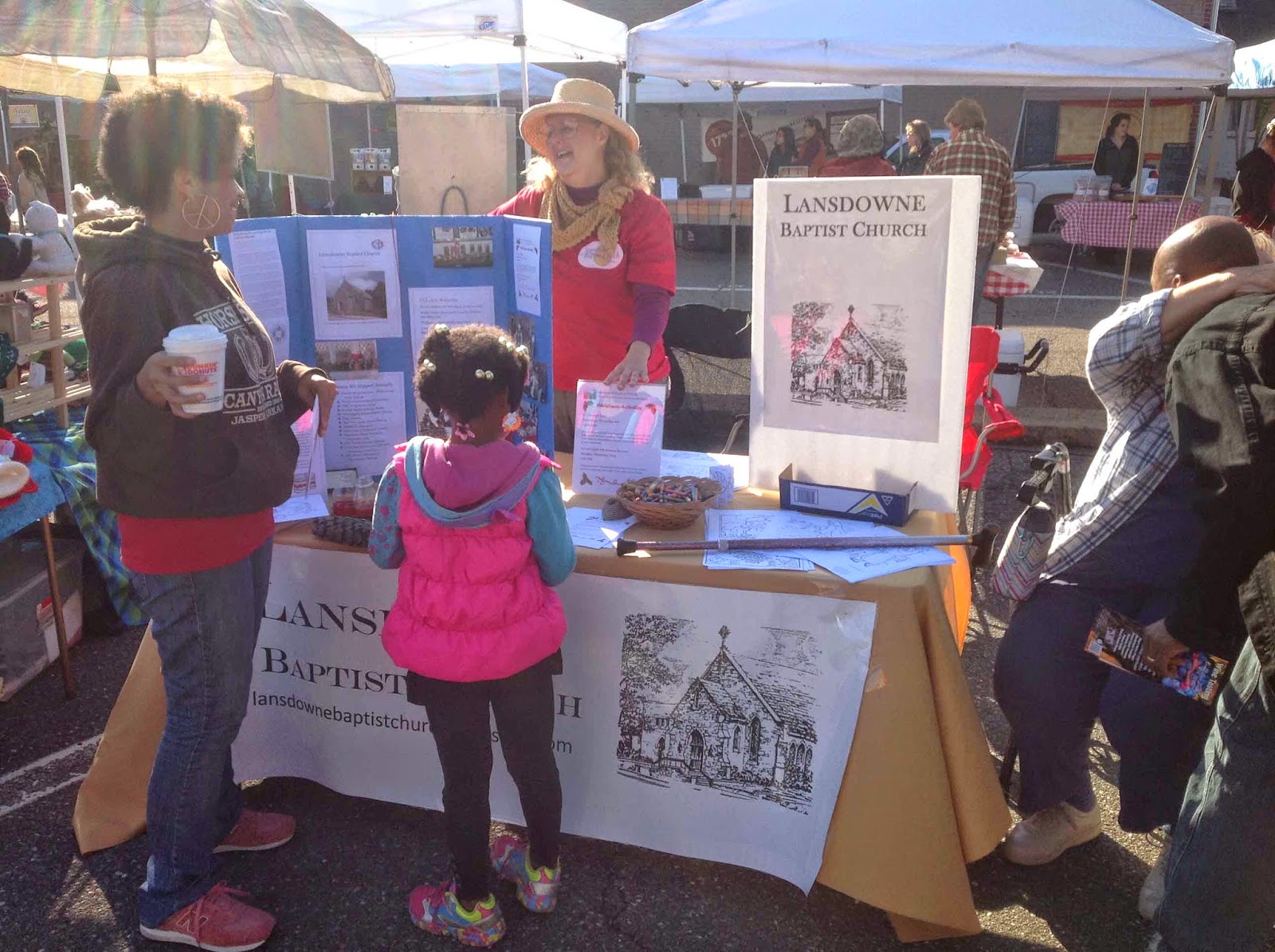 It was wonderful to see what special talents each member of the team brought to the effort. While one member took fliers around to hand out, several greeted people who came to the table, others with craft skills created cup and ball games for the kids from recycled materials. We learned a lot that day and met some wonderful people. It was also a great time for the church members working the table to get to know each other better and fellowship with one another. We look forward to being there again next year.

Lansdowne Baptist Church members attended the annual Philadelphia Baptist Association mission banquet this October. The emphasis was hospitality and outreach to the community, including the immigrant community. One of our own received recognition for her years of diligent service to a local interfaith food cupboard.

The president of American Baptist Churches USA, Don Ng, was the keynote speaker. He told the moving story of his father coming to the United States, fighting in World War II and receiving citizenship based on that sacrifice. Don Ng told of the struggles to bring his father's wife and son over from China to join him. The First Baptist Church of Boston assisted Mr. Ng in his efforts and helped his family after their arrival in the US. This church helped them navigate the rough waters faced by all immigrants to this country. Mr. Ng spoke movingly of the trouble he faced as a child growing up in America, a first generation child of immigrant parents who was not treated well or taken seriously by the school system he was raised in, even as a native-born son of the US. He called all churches to assist immigrants in their struggles and make a positive impact on their lives.

Thirty of the PBA's 129 churches were represented in that banquet hall at the Hilton Hotel in Philadelphia, providing over 600 members to celebrate in fellowship together. The youngest recipient of an award for community action was eleven and her efforts were well recognized. I wonder what we will accomplish together for next year?
Posted by Lansdowne Baptist Church No comments:

Fall Back for November 2nd! 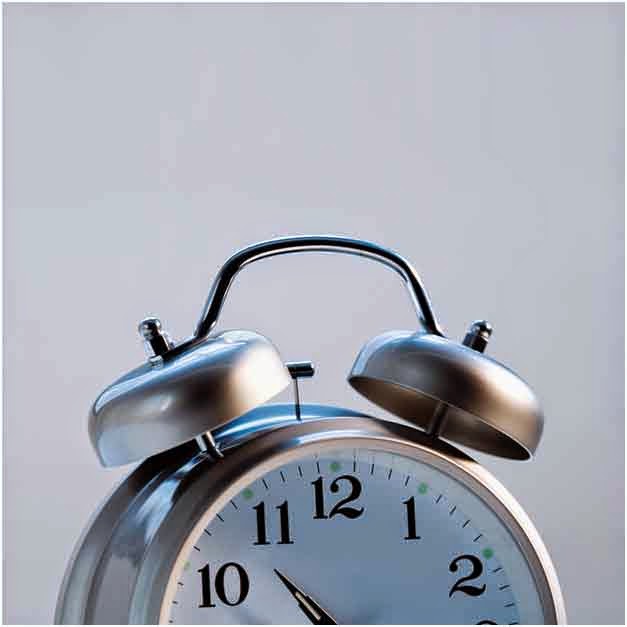 Just a little scheduling reminder from Lansdowne Baptist Church to set those clocks back an hour Saturday night, November 1st. It is time to "fall back" and gain an extra hour's sleep so we'll all be bright-eyed, bushy tailed, and on time for Sunday School and worship!

If you are in the area, you have an open invitation to stop by on Sunday. We will be glad to meet you.
Posted by Lansdowne Baptist Church No comments:

Explaining the apostle Paul's very different approach to evangelism and its application today.

Note to pastors: shifting from Thessalonians to Thessalonica can cause some challenges!
Posted by Lansdowne Baptist Church No comments:

Due to technical difficulties, the camera was not working today. However, the message is too important not to offer for consideration. Below is the complete transcript of the sermon.

Exploring the Ten Commandments and what they mean for us in today's world. "This covenant was an invitation for the people to accept God’s love for them and choose to live the better lives God would have them live. That remains true for us today, all around the world."

Fun fact: "As an interesting aside, the law “honor your father and mother” was particularly aimed at the old and infirm. It let the people of Israel know that, unlike some other nations, it was not okay to send the old folks off on a trip in the hopes they’ll either be eaten by wild animals or die of exposure. If you wanted to stay on the land God gave you, you’d need to maintain higher, more humane family standards."

If you find yourself in the the Lansdowne, PA, area any Sunday, consider yourself to have an open invitation to come and worship with us. You will be most welcome!
Posted by Lansdowne Baptist Church No comments:

From Paul's letter to the Philippians, Chapter 1, verses 20-30, delivered on September 21, 2014.
Posted by Lansdowne Baptist Church No comments:

Beyond the Law's Letter

We are living in a highly charged, vastly divided, increasingly angry society that appears to be bound and determined to debate ... everything! Sadly, such debate rarely gets us anywhere, except for further divided. Here are three readings that offer up a different solution, actually talking to each other and listening to what others have to say, respectfully. We recently used these to establish guidelines for civility in our Bag Lunch Bible Study class (to which you are invited) on Wednesdays, which is working beautifully if I do say so myself.

“Debate is about humiliating your opponent. Dialogue is about inviting your friend into conversation. Jesus was a master dialogist. He didn’t use power to overcome; he used kindness to overwhelm. To dialogue successfully, listening trumps talk and reflection trumps reactivity.”

Jesus, the master dialogist, said, “Very truly, I tell you, the one who believes in me will also do the works that I do and, in fact, will do greater works than these, because I am going to the Father.”

“Never spend time arguing with a fool—because from a distance people can’t tell who’s who.”

All three make compelling points and offer up a more loving alternative to the modern trend. If we all gave it a try, who knows what might come of it???

Any Sunday you find yourself in or near Lansdowne, Pennsylvania, you have an open invitation to visit us. We'll be very glad to see you ... and to listen with great interest to what you have to say.

Resources
In case you are curious, these quotes came from the following sources:
Jim & Casper Go to Church by Jim Henderson and Matt Casper.
The New Oxford Annotated Bible (NRSV).
The President's Devotional by Joshua DuBois.
Posted by Lansdowne Baptist Church No comments: